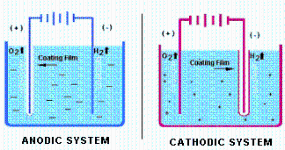 Electrocoating is a painting method which uses an electrical current to deposit paint. The process works on the principal of "Opposites Attract".

The electro-coat system applies a Direct Current (DC) charge to an unfinished metal part immersed in a bath of paint particles containing an opposing charge. The paint particles are drawn to the metal part and paint is evenly deposited forming a continuous film over the entire surface, until the coating reaches the desired thickness. At a predetermined thickness, this film build insulates the part, attraction stops, and the process is complete.

Depending on the polarity of the charge, electrocoating is classified as either anodic or cathodic.

In anodic electrocoating, the part to be coated is considered the anode.  With a positive electric charge, this part will attract negatively charged paint particles from the paint bath. During the anodic process, small amounts of metal ions migrate into the paint film.  This metal-migration can limit the coating performance properties. The main use for anodic products is interior or moderately exterior environments. Anodic coatings are economical systems that offer excellent color and gloss control.

In cathodic electrocoating, the part to be coated is considered the cathode. With a negative electric charge, this part will attract positively charged paint particles from the paint bath. With this reversal of polarities, the amount of iron entering the cured paint film is greatly reduced which improves the cathodic properties. Cathodic coatings are high-performance coatings with excellent corrosion resistance that can be formulated for exterior durability.

WHAT IS THROWING POWER?

Perhaps the most beneficial aspect of the electrocoating process is "throwing power".  This is the ability of electrodes (anodes or cathodes) to force paint particles onto and into every surface of the selected part.  Correct “throwing power” allows for an efficient and absolute coating on the final product.

Each charged coating particle in an E-coat solution seeks out the point of greatest opposite attraction. At the beginning of the process, this could be anywhere on the bare metal surface. However, as coated particles are deposited, they lose their charge and insulate the miniscule areas they cover.  This action then forces supplementary coating toward exposed surfaces, promoting full coverage.

An electrocoat finish builds at a very even rate.  Each layer of paint particle adheres to the part surface until the insulating nature of the coating is sufficient to halt further attraction. Depth of the film build can be closely controlled through regulation of the voltage applied to the coating solution.

In contrast to spray-coating or powder-coating, partially enclosed areas and inside corners are not influenced by the Faraday Cage Effect. This is the phenomenon in which repulsive electric fields produced along metal corners greatly hamper spray penetration on interior spaces. 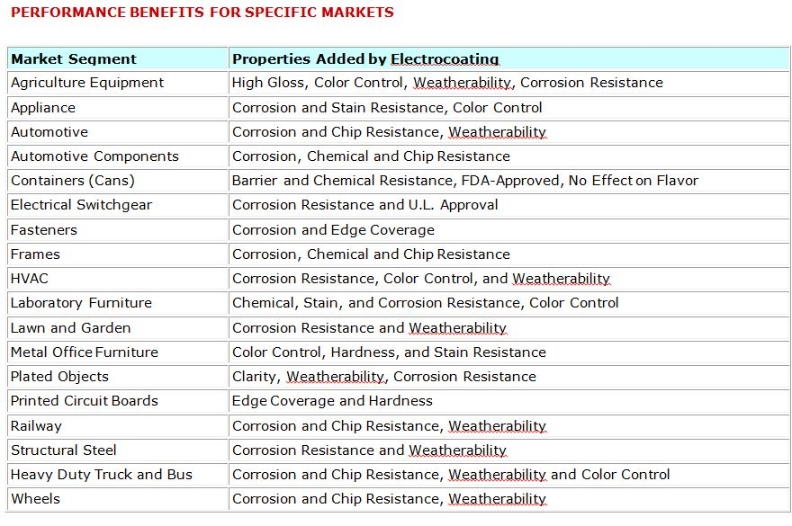 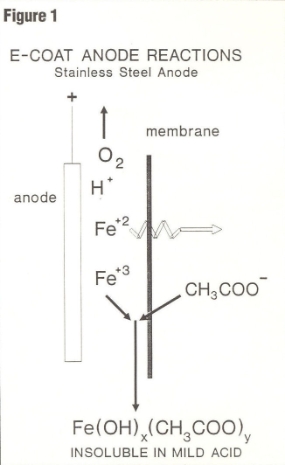 A comparison with stainless steel anodes

Stainless steel is the common material chosen for electrocoat anodes. It’s relatively inexpensive and readily available. But stainless steel has a major drawback: It dissolves during e-coating, allowing iron into the anolyte system or paint tank.

Figure 1 illustrates the dissolution process, in which iron in the stainless steel reacts with the acid and water in the anolyte. Dissolution occurs because the electrical potential needed to form an iron oxide is less than that needed to initiate water electrolysis.

The effects of iron oxides

The release of iron oxides into the anolyte system and/or paint tank can cause problems. In the anolyte system, the electrolytic formation of iron oxides on the anode surface increases the resistivity of the anode, affecting localized current density. And at just 50 parts per million (ppm), iron in the paint tank can change the paint color, especially the whites and beiges. At 100 ppm, iron in the black and gray primers used on auto bodies reduces the smoothness of the coat. This reduces the smoothness of the spray coat that follows. And because ultrafiltration doesn’t remove iron, iron is coated out with the parts. This high iron content in the paint film increases corrosion potential.

The ideal anode doesn’t dissolve at all, and very few iron oxides enter the tank or anolyte system. With an insoluble anode, the reaction during e-coating corresponds to Figure 2.

Insoluble anodes are available.  Instead of using bare stainless steel, insoluble anodes have an inert material on their surface.  Usually, this inert material is from the platinum-group of metals or the oxides of these metals.  For e-coating anodes, ruthenium oxide is the most common choice.

But a solid sheet of ruthenium oxide would be too expensive to justify its use, so only a thin coating of ruthenium oxide is applied to the surface of a titanium substrate.  Titanium is used because of its resistance to corrosion, electrochemical properties, availability, and cost.

An anode cell with a ruthenium-oxide-coated electrode virtually eliminates iron contamination.  Low iron contamination means no color changes and no danger of decreasing the corrosion resistance of the part.  In addition, there’s less sludge in the anode cell and no iron deposits on the membrane.  See Figure 3, which compares the iron content of two anolyte systems, one with stainless steel anodes, and one with ruthenium oxide anodes.

Although ruthenium-oxide-coated anodes cost more at first, compared with stainless steel anodes, they cost less over the anode’s life cycle. Expect a ruthenium oxide anode to last about three times as long as a stainless-steel anode.  Typical service life is 3 years; with potential of up to 7 years.